Bob Caslen, the University of South Caro­lina’s 29th president, is a retired Army lieutenant general and former superintendent and president of the U.S. Military Academy at West Point.

“I am at South Carolina because of my love of the next generation of men and women who are going to be the leaders and contributors in service to their communities,” Caslen says. “I want to give back to this next generation.”

During his time at West Point, the academy was recognized as the nation’s No. 1 public college by U.S. News and World Report and Forbes magazine. After retiring from the Army in 2018, Caslen became the senior counsel to the president at the University of Central Florida and served as interim chief financial officer.

Caslen grew up in Vermont, where he worked in his family’s ski lodge business and was on the high school ski and football teams. From there, he was recruited to play football at West Point. Along with his bachelor’s degree from West Point, Caslen holds an MBA in finance from Long Island University and a master’s in industrial engineering from Kansas State University. He and his wife, Shelly, have been married for 42 years and have three sons and four grand­children. 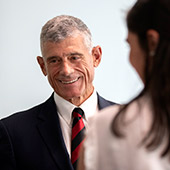 President Bob Caslen shares his vision for academic excellence, research and diversity at the University of South Carolina. 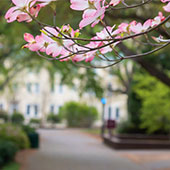 A Path to Excellence

As our world changes constantly — sometimes seemingly overnight — an agile university committed to properly serving its students, community and state well into the future must periodically reevaluate its priorities, opportunities and goals. It is in this light that President Caslen led the creation of a new strategic plan for the university, centered on the ideals spoken of in the Carolina Creed. 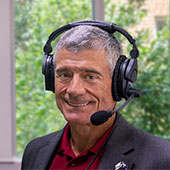 State of the University Podcast

Get the inside story on the University of South Carolina from the flagship university's 29th president, Bob Caslen. 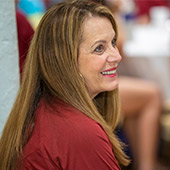 Shelly Caslen grew up in Highland Falls, New York, not far from the U.S. Military Academy. She was recognized for her work with Army spouses while stationed in Hawaii. The couple has been married for 42 years and they have three sons and four grandchildren.

Bob Caslen at a Glance

Educational Background: A graduate of the U.S. Military Academy at West Point, Caslen holds a Master of Business Administration degree from Long Island University and a Master of Science degree in industrial engineering from Kansas State University.

Personal: Enjoys motorcycles and CrossFit training. Caslen is married to the former Shelly Pastin from Highland Falls, New York. They have three sons and four grandchildren.

Vision: “It’s important to edify, build up. That’s what leaders do — they build people up.”

The Future Planning Group is examining the impact of the coronavirus pandemic on UofSC and making policy recommendations concerning the safe return of our students and employees to campus.

If you would like to have President Bob Caslen speak at an upcoming event, please fill out the request for remarks form at least 30 days in advance.

Office of the President