Department of English Language and Literature 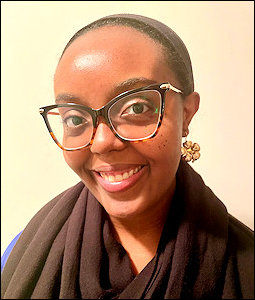 My research centers on language in contact and in context, themes that capture both my languages of interest (Creoles and other high-contact and minoritized language varieties, such as Kwéyòl Donmnik (Dominica Creole)) and my linguistic features of interest (e.g., pragmatic elements, such as pragmatic markers). I am also passionate about the broad inclusion of minoritized languages in linguistics pedagogy and research and am engaged in work centered on the linguistic and professional experiences of Black faculty in the language sciences. What I love most about being a linguist is having opportunities to spark ah-ha! moments about varieties and features of language that are marginalized, stigmatized, or overlooked. In my work, I draw upon a mixture of methodologies, including corpus-based analyses, metalinguistic interviews and surveys, and experimental tasks.

One of my current projects centers on pragmatic markers in Kwéyòl Donmnik (e.g., konsa ‘so’, Bondyé ‘God’), an understudied and endangered Creole language, and in English (e.g., so, oh my God), the language with which it has been in intense contact for over 200 years. This work has inspired me to dig deeper into the ways in which pragmatic markers are used as expressions of identity and cultural knowledge as well as multifunctional communication tools, particularly within minoritized communities.

In collaboration with researchers at the University of Michigan, I am examining the language attitudes and labeling practices of Creole language speakers and of linguists in order to generate recommendations for better integrating Creoles languages into linguistics classrooms. Alongside fellow scholars in an NSF-funded Build and Broaden 2.0 Program, I am also coauthoring a book that examines how linguistic, ideological, and identity-related factors shape Black faculty members’ experiences.

In other projects, I have studied the functions of the French pragmatic marker bon ‘well’ and written about Creole languages as they relate to humans’ vast linguistic capabilities. I have also examined the Kwéyòl Donmnik noun phrase and am writing a book chapter that provides an overview of noun phrases across Caribbean Englishes and English lexified Creoles.