Congress still shall make no law

For more than 200 years, the First Amendment has guaranteed freedom of religion, speech, press, assembly and petition. It is what allows people to question the government and speak up when something is wrong. It is vital to democracy for these reasons and is especially important now during a presidential election year, a period of social unrest and a pandemic.

“That’s how society progresses — by people identifying an issue and speaking out about it,” Eric Robinson, an assistant professor in the SJMC, said. “That’s the only way to convey something should change, and there’s always been resistance no matter what it is.”

The freedoms that were promised in 1791 came into question after the death of George Floyd last May. In some cities, news reporters were arrested, peaceful gatherings were broken up and crowds became violent.

J-school alumnae Miranda Parnell experienced this violence firsthand while reporting for WIS News at a Black Lives Matter protest in downtown Columbia. Someone threw a brick and hit Parnell in the head, sending her to the ER with a concussion. That prompted discussions on how to balance the importance of covering these events with the safety of those covering them.

“If you want journalists to be truth seekers as they should be, then you have to give that space for us to do that and violence is not that space,” Parnell says.

In August, protests caught media attention on the University of South Carolina’s campus. Jim Gilles, an evangelical pastor who travels to different universities, came to Greene Street with a “BLM are racist thugs” sign. Students held a counter protest, and freshman Trey Hogan made headlines for drowning Gilles out with his trombone.

“For years, people have just gone by and ignored the people like that who pop up on campus,” Parnell says. “Shout out to this generation for saying, ‘You know we have time in between classes. We’ll sit out here and do a protest.’”

While Gilles’ remarks prompted a statement from President Bob Caslen explaining that they were not reflective of the university’s values, Robinson says it’s important to remember that the First Amendment’s protections still apply.

“A university, at least ideally, is supposed to be an exchange of ideas and thoughts and debate and discussion, and even some discussion or ideas that you might find abhorrent or you might find horrible still have to be a part of that mix,” Robinson says.

In recent years, the use of terms such as ‘fake news’ has fueled distrust of the press. And when those attitudes take hold, Robinson says, people can lose sight of the important role journalists play in a healthy democracy.

“One of the main reasons we have the media is to look over the shoulder of people in power and say, ‘What are you doing?’” he says.

One of the biggest obstacles journalists face is people who spread false or misleading information. Parnell says media literacy education is key to combating the issue.

“I don’t think that this should be a class that you just take if you want to be a journalist,” she said. “You have to teach people how to see the signs of something that’s not journalism." 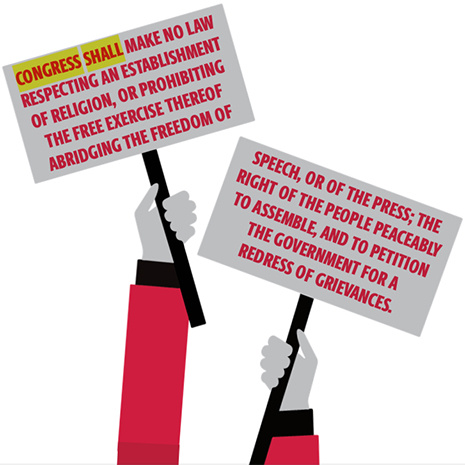 The First Amendment was adopted on December 15, 1791, as one of the ten amendments that constitute the Bill of Rights.