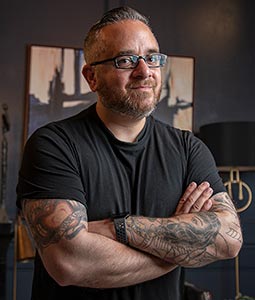 Matthew Dunn has logged more than 19 years of independent live event promotion through his own company, Syracuse Shows LLC, but he has also worked in multiple different ventures within the industry across his 20+ years of experience. Dunn has expertise in live event promotion and production, entrepreneurship in the music industry, music industry marketing and promotion (including digital media and social media marketing), record company operations (including both major and independent label functionality), artist management and development, branded entertainment, and research methodology.

Dunn’s career path was a bit unorthodox, as he built his career within the music industry prior to his academic career. Starting as a simple street team representative for Equal Vision Records in Syracuse, N.Y., in 1998, his experience and connections within the independent music scene earned him the opportunity to work at Trustkill Records starting in 1999. That experience provided work in artist development, artist management and marketing, and general artist and repertoire (A&R) relations at a thriving independent record label. With these network connections, Dunn then stepped into live event promotion in 2000.

After starting to promote events in community centers and D-I-Y halls and accompanying change in the industry during the time period, Dunn's live event promotion company exploded in 2002. Going from promoting a small number of events to averaging more than 50 events per year, opportunities arose within the industry for him to explore different ventures. In 2005 Dunn left Syracuse to commence work at Max Cruise Entertainment in Point Pleasant, N.J., all while continuing to promote events in Syracuse and occasionally develop projects at Trustkill Records.

As Dunn's responsibility grew at Trustkill Records, he joined the company full-time in the spring of 2006 in Tinton Falls, N.J. After relocating to Brooklyn, N.Y., during that same summer, he accepted a position at Artist Arena in Manhattan in the spring of 2007, which had him working hands-on with labels, artists, and managers in developing ecommerce strategies for live event ticketing and fan community experiences. As the growth of Artist Arena was exploding and the industry began transitioning into a stronger revenue stream found within live entertainment, Artist Arena was acquired by Warner Music Group (WMG) in 2008. Dunn’s work at WMG included D2C e-commerce, artist development, staff management, organizational management, and digital marketing objectives at one of the largest major record labels in the world.

During this entire time period, Dunn continued to promote events in Syracuse, N.Y., leading to his relocation back to Syracuse in the summer of 2012. This gave Dunn the opportunity to focus more attention on his company and to enroll in higher education. He completed his Bachelor of Arts in Sociology from the College of Arts and Sciences at Syracuse University in 2016, with a focus on music subcultures and groupings. Due to his professional footprint in the city and his working relationships with the Bandier Program at Syracuse University, Dunn was hired as an adjunct professor at Syracuse University, teaching a course titled, "Music Industry and the Media (MUI 305)," during the 2016-17 academic year. MUI 305 was a course that focused on media integration within the industry through journalism, marketing and artist development.

Dunn's passion in providing the next generation of industry professionals the tools and experiences necessary for development led him to Boston, Mass., and Northeastern University in the fall of 2017, where he completed his Master of Science in Music Industry Leadership at the College of Arts, Media and Design in August 2018.

Since completing his M.S., Dunn has been hired as a clinical instructor and internship coordinator in the Department of Sport and Entertainment Management at the University of South Carolina, where he will begin student development in the fall of 2019.