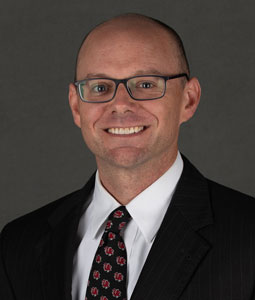 Matt Freed joined the College of Hospitality, Retail and Sport Management at the University of South Carolina as its senior web manager in August 2022. Freed spent more than two decades working in collegiate sports before moving into his current position with HRSM.

No stranger to the Gamecocks, Freed worked in the athletics department at the university for more than 16 years in various capacities with its communications and public relations office. In his most recent role, he served as assistant athletics director for digital technology services. His primary duties included oversight of the athletics website, GamecocksOnline.com, providing video coverage of all media opportunities for football, basketball and baseball, and running live video streams for social media of all non-sporting events.

In addition to his responsibilities for digital content and strategy during his tenure with Gamecock athletics, Freed spent more than a decade as the primary media relations contact for various teams including volleyball, track and field, and women’s tennis. He was the media director for the 2015 SEC Women’s Tennis Tournament and served in the same role the following year for the SEC Men’s Tennis Tournament when South Carolina hosted the championships. Freed was also a member of numerous committees within athletics such as information technology, awards, content, professional development, and diversity and inclusion.

Prior to his move to the Palmetto State in 2006, Freed was the assistant media relations director for Texas Christian University’s athletics department. He was the media contact for the women’s basketball and tennis teams over a two-and-a-half-year period with the Horned Frogs. During the 2004–05 season, he successfully implemented a promotional campaign for women’s basketball senior Sandora Irvin who went on to become the first All-American in school history after being recognized by the Associated Press, the United States Basketball Writers Association and the Women’s Basketball Coaches Association.

Freed has also worked on a part-time basis for a couple of organizations during his professional career. From 2007 to 2017, Freed was an adjunct faculty member for American Public University System teaching foundations of online learning as well as multiple courses in the sport management department. He also did a five-month stint in 2017 as director of strategic communications for the National Collegiate Equestrian Association.

Freed earned his Bachelor of Business Administration with a concentration in finance and a minor in mathematics from Texas Christian University in 2002. Upon graduation, he enrolled at the University of Tennessee and completed his Master of Science in sport management in 2003. He worked in the football, marketing and media relations offices during his time as an undergraduate and was the primary media contact for both soccer teams and the men’s tennis team his final two years. As a graduate student, Freed served as the media relations contact for the Lady Vols’ tennis and volleyball teams.

Freed’s wife of 15-plus years, Jessica, also works for the University of South Carolina as the director of recruitment for the undergraduate admissions office. They have a son, Austin, and a daughter, Virginia.

In his spare time, Freed enjoys spending time and traveling to new places with his family. He also enjoys taking on the challenge of any home improvement project in his never-ending quest to become the ultimate DIYer.