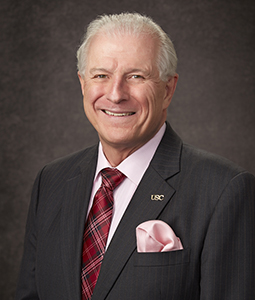 Brian J. Mihalik is a professor in the School of Hospitality and Tourism Management and in the Department of Sport and Entertainment Management and former dean of the College of Hospitality, Retail and Sport Management. Mihalik received his doctorate of education from Temple University, and two master's degrees with an undergraduate degree in business administration from Syracuse University. Throughout his career, Mihalik received tenure at Clemson University, Oklahoma State, S.U.N.Y Brockport, Virginia Tech and the University of South Carolina. With more than 20 years of administrative experience in both the academic and public sectors, Mihalik has served as an administrator and / or faculty member at six state universities. Additionally, Mihalik served approximately eight years in administration at Virginia Polytechnic Institute and State University beginning with his duties as a department head and culminating as the associate dean of the Graduate School. Furthermore, Mihalik's educational programs are recognized or implemented in countries such as the Dominican Republic, Switzerland, northern Italy, and Austria.

As dean, Mihalik and his team raised more than $34 million in the latest USC Carolina’s Promise capital campaign. He has published more than 100 articles ranging from refereed journal articles to land grant extension publications and has received more than $1 million in external grant funding throughout his career. His research on global and mega-events has appeared in publications such as USA TODAY and Atlanta Journal Constitution and covers events from the World's Fair to the Olympic Games.

Mihalik has been married to his wife, Linda, for 49 years. They have two children, and three grandchildren. He is a skier, scuba diver, hiker, enjoys bodysurfing at the beach and throwing batting practice to his grandchildren. During his college days, Mihalik played three years of baseball for Syracuse's intercollegiate team and continued to play club rugby for the following 13 years.