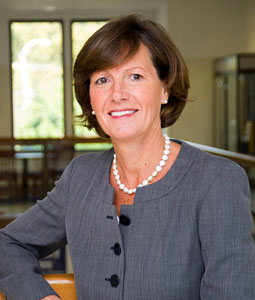 Susan O’Malley is the former President of Washington Sports Entertainment and the first female President of a Professional Sports Franchise.

Never wavering from her original career goal to run a sports franchise, she interned with the Bullets (later renamed the Wizards) and the Capitals hockey team. After graduating from college, she worked with an advertising firm. But when a job opening came up within the Bullets organization for director of advertising, she was compelled to apply. Just five years later, she was named president of Washington Sports and Entertainment, including the Washington Wizards.

O'Malley took an organization ranked last to its counterparts in close to every category, and initiated policies and procedures that formed positive relationships with ticket holders, corporate sponsors, and the media. In her first season handling off-court activities, the team had the largest ticket revenue increase in the history of an NBA franchise to date. That same year, the club achieved its highest season ticket renewal rate, including the year following the 1977-78 Championship season. By the 2005-2006 season, the Wizards attracted more than 17,000 fans per game, had 14 sellouts and earned their second consecutive trip to the NBA playoffs. By the time she retired in 2007, the Verizon Center had recorded more than 21.2 million patrons.

She has been described as a skilled motivator, who "created a spirited, results-oriented work environment that has been emulated throughout professional sports."

Jeopardy fans will also be interested to know that O'Malley is the correct response to the Jeopardy answer, "First woman to run a professional sports franchise."