The University of South Carolina’s Darla Moore School of Business team won first place at the Technological University Dublin (TU Dublin) International Case Competition for the second year in a row. It was a unanimous decision from the judge panel after the team presented a case on Disney entering the world of streaming services.

The team’s victory did not come without its own obstacles. The night before the flight to Dublin, one of the members was hospitalized and unable to compete. Although he was quickly released and is now doing fine, this left only three of the original four able to participate.

The competition consisted of two cases taking place on the same day. The cases focused on the element of disruption. The teams were given three hours to craft a presentation and field questions with their existing knowledge on the subject and the information provided. Use of the internet was prohibited. While it was a difficult task, the competition and time crunch provided them with important real-world experience.

“Public speaking is a very valuable tool to take away,” said team member Allison Amen, a fourth-year marketing student. “It’s that ability to present something that you don’t have all semester to work on. It’s a lot of thinking on your feet, and you have to synthesize confidence.”

Amen represented the Moore School alongside fellow fourth-years Michael Martin, an international business and finance student, and Madisyn Horton, a marketing student. The Moore School was one of eight teams to participate and one of four to compete in the final round. Besides the Moore School, the final case consisted of a team from the Netherlands and two teams from TU Dublin.

The experience was not only a chance to compete in a national business forum but also to learn from professionals in the field. Before the competition, faculty instructor Professor DeMouy, the coach for the Moore School’s team, and the TU Dublin faculty leader both taught a two-day seminar for the student teams to share their knowledge and experience in case competitions. The seminar prepared participants and aided in their knowledge during the competition.

Martin said, “I was very grateful for the opportunity to hear a variety of perspectives from the faculty of TU Dublin, the University of South Carolina, Rotterdam School of Management at Erasmus University and the University of Ottawa that we would later employ in our strategic recommendations for each case.”

When they weren’t competing, the team explored Ireland and spent time with other students from the competition. When talking about her favorite experiences during her time in Dublin, Amen said she enjoyed, “getting to know the TU Dublin students. They showed us where they ate on campus and different pubs in the area, so we got to really see Dublin.”

This is not any of the team members first or last case competition. All three teammates plan to participate in other competitions this year. Amen will participate in a competition in Quebec at the end of February, while Martin and Horton will compete in Spain at the end of March. While there is no physical prize for winning the TU Dublin, these students do it for new experiences and learning. Whether it’s visiting a new country or dominating international case competitions, there’s no stopping this group of Moore School students any time soon. 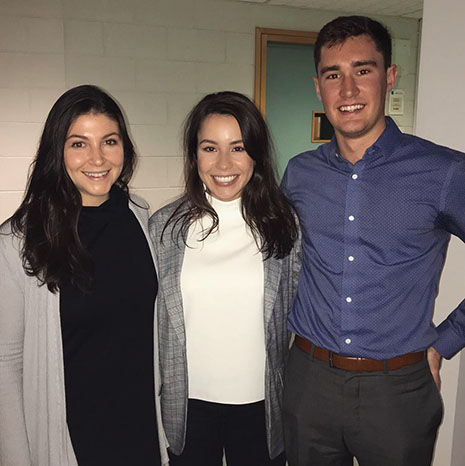