Moore School banking and finance professor Allen Berger is publishing a book next year about the 2008 government bailouts and the newer concept of private sector bail-ins of struggling banks.

The book, TARP and other Bank Bailouts and Bail-Ins around the World: Connecting Wall Street, Main Street and the Financial System, encapsulates multiple papers Berger published over the past several years. Berger did his research and is co-authoring the book in conjunction with his former Ph.D. student Raluca Roman, now with the Federal Reserve Bank in Philadelphia.

A Carolina Distinguished Professor and H. Montague Osteen Jr. professor of banking and finance, Berger initially was going to focus his book only on the U.S. Troubled Asset Relief Program (TARP), enacted in 2008 in response to the financial crisis and one of the biggest bank bailouts of all time.

However, as the proposal was circulated, it became clear that “we should talk about bail-ins because those are also important,” he said. “That is the direction that the world is moving.”

With bail-ins, the government does not provide the capital or money for the banks to recapitalize — a bail-in requires the private sector to provide the funds.

“It seems to be working in terms of expectations, and banks are holding more capital, and they’re adjusting their capital more quickly,” Berger said. “But we do not know if it’s actually going to work.”

Berger’s publisher for the book is global information and business analytics publisher Elsevier; it is already listed on Elsevier’s and Amazon’s websites for pre-order.

The book “presents a theoretically-informed and empirically rich account of bailouts and their implications; uses TARP as a case study to paint a complete and balanced picture of bailout programs worldwide; and illuminates the long-run welfare analysis of a bailout program, still poorly developed in the economic literature,” according to Elsevier’s key features of the book listed on its website.

The book includes a number of chapters on what the authors call the “first line of defense.”

These are actions such as capital and liquidity requirements and stress tests “that the government can take in advance and in good times to keep the financial system safe, to protect it from ever having to resort to bailouts and bail-ins,” Berger said.

However, both bailouts and bail-ins, if they are done properly, can work, Berger said.

In practice, bail-ins probably are better, he added.

Some banks are too big to fail, he pointed out.

“If it gets to the distress point, you have to do something,” Berger said. “You cannot let them fail because it is too much of a disaster for the economy.”

Before and during the 2008 financial crisis, the investment banks behaved worse than the commercial banks, Berger said, partly because they believed they were too big to fail.

“Then Bear Sterns got rescued in 2008, and I believe that Dick Fuld [of Lehman Brothers] assumed that it would get bailed out, so Lehman Brothers did not take the action necessary to keep themselves from failing,” he said. “They thought the institution was too big to fail. But it was not.”

While the forthcoming book does not focus exclusively on TARP as the authors had originally proposed, TARP was clearly successful, Berger said. He points out that the money given to the banks was all paid back.

“Some banks paid, some banks didn’t, but the government got more money than they lent out,” he said. “That doesn’t mean that it is a good investment by itself, a good financial investment. It was a relatively low rate of return for a really risky investment.

“It should have been a higher rate of return for the risk. But that was not the point. The purpose of the program consisted of two main things: rescue the financial system and rescue the economy, and it did both.” 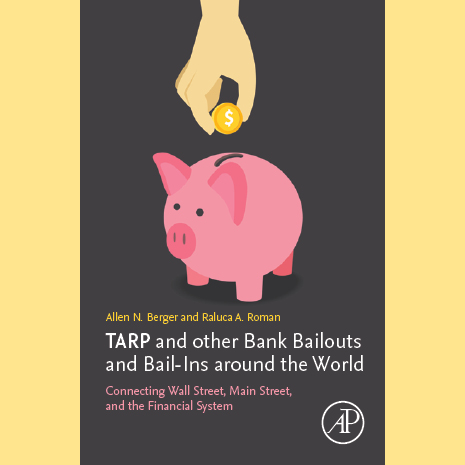 Banking and finance professor Allen Berger's book, TARP and other Bank Bailouts and Bail-Ins around the World: Connecting Wall Street, Main Street and the Financial System, details the 2008 U.S. Troubled Asset Relief Program. The program was created in response to the 2008 financial crisis and was one of the biggest bank bailouts of all time.