Two Moore School faculty have been named by the Web of Science Group among the top 1 percent of influential researchers in economics and business.

International business professor Tatiana Kostova and management and human resources professor Robert Ployhart were identified as being among the world’s most influential researchers who have been most frequently cited by their peers over the past decade, according to the Web of Science Group. Kostova is a Carolina Distinguished Professor, the Buck Mickel Chair in international business and works within the Center for International Business Education and Research. Ployhart is the Bank of America Professor of Business Administration in management and works within the Center for Executive Succession and the Riegel and Emory Center for Human Resources.

Kostova and Ployhart “are among this elite group recognized for [their] exceptional research influence, demonstrated by the production of multiple highly cited papers that rank in the top 1 percent by citations for field and year in Web of Science,” according to the recognition letter.

Having two Moore School professors on this list of the top 1 percent of citations among four total professors acknowledged at UofSC shows the caliber of research the faculty produce, said Moore School Dean Peter Brews.

“To be on this list is an amazing accomplishment that recognizes a career of truly world-class research, and having two from the Moore School in this stellar group is a testament to the quality of the research done at our school,” he said. “Joining their two colleagues at the Arnold School of Public Health is further validation of the leading research done at South Carolina.”

Representing the economics and business category, Kostova has been with the Moore School since 1996. She teaches a variety of international management courses in graduate programs at UofSC and at other universities around the world. A recipient of many teaching awards, including the Alfred G. Smith Teaching Award and Professor of the Year, she also is an instructor for the Faculty Development in International Business programs, which helps other business schools develop their international management courses.

Kostova’s research focuses on international management, macro-organizational behavior and organization theory. She specifically studies a variety of aspects of multinational corporations:  institutional and cultural embeddedness, cross-border transfer of management practices, knowledge management, organizational legitimacy and social capital as a source of competitive advantage. As of December 2019, her publications have received more than 17,000 Google Scholar citations. She has been published in virtually all the top management and international business academic journals. Kostova has served as chair of the International Management Division of the Academy of Management and vice president and fellow of the Academy of International Business.

Ployhart has been with the Moore School since 2004. Ployhart teaches a variety of management courses for undergraduates and graduate students as well as a number of executive education programs. He has won many teaching and scholarly awards and is a fellow of the Association for Psychological Science, the Society for Industrial and Organizational Psychology and the American Psychological Association.

His research focuses on human resources and organizational behavior with a strong quantitative element; research topics include human capital resources, staffing, personnel selection, recruitment, staffing-related legal issues and applied statistical models. His research has had a strong impact on private and public organizations and has received a number of practice awards for innovations in human resources. Ployhart’s publications have each received more than 15,000 Google Scholar citations. Ployhart has been published in top academic journals; he has also co-authored multiple books.

Kostova and Ployhart are among a small group of elite international scholars. In 2019, fewer than 6,300 of the world's researchers across 21 research fields have earned the exclusive distinction of Highly Cited Researchers 2019, the Web of Science Group stated on their website. The Web of Science Group is the world’s largest publisher-neutral citation index and research intelligence platform. While Kostova and Ployhart were recognized for economics and business, 21 Essential Science Indicators fields were included for the researchers with 40 percent of those recognized belonging to several fields.

“The Highly Cited Researchers 2019 list from the Web of Science Group contributes to the identification of that small fraction of the researcher population that contributes disproportionately to extending the frontiers of knowledge and gaining for society innovations that make the world healthier, richer, more sustainable, and more secure,” according to the report released with the list. 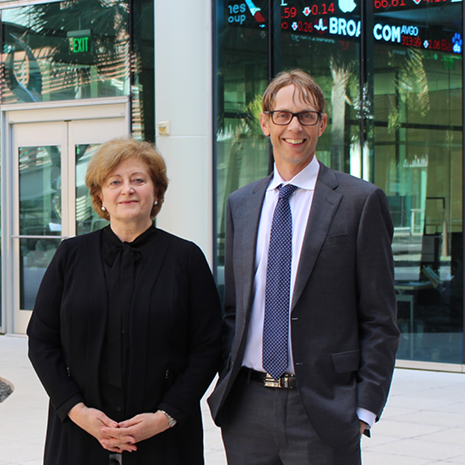 Learn more about the Web of Science Group designation.