Moore School alumnus Michael Roth is famously known by the Gamecock community as one of the star pitchers that helped lead UofSC to back-to-back College World Series wins in 2010 and 2011. After spending seven years in professional baseball, Roth officially retired after the 2018 season and dedicated himself to a new career in commercial real estate.

Drafted originally in 2012 by the Los Angeles Angels in the ninth round, Roth spent seven years with six Major League Baseball organizations and played a few stints of baseball in the Dominican Republic. After spending 2012 with minor league teams in the Angels’ system, Roth made his MLB debut in 2013 with the Angels, appearing in 15 games and 20 innings that season as a relief pitcher with a 7.20 ERA.

Realizing he may not make a career out of professional baseball, Roth joined the NAI Earle Furman real estate firm in the fall 2016 offseason as an intern in his Greenville, South Carolina, hometown. He continued working with NAI Earle Furman in the 2017 offseason and cultivated relationships with prospective commercial real estate clients interested in investing in the Southeast market throughout the country as he traveled for baseball during the 2017 and 2018 seasons.

“There was only so many hours in the day I could work out and throw a ball during the offseason,” he said. “I knew I was interested in learning more about real estate. That first offseason, I loved the excitement and the chase of a deal and knew it was something I’d be interested in when baseball had run its course.”

Having earned his international business and marketing degree before pursuing professional baseball, Roth said his coursework taught him how to succeed in real estate.

“I look at my job as a standalone business – I am responsible for finding new clients, consulting with clients, marketing, reviewing financials, etcetera,” he said. “I use bits and pieces of things I learned from the Moore School every day, whether that’s tweaking the marketing material or understanding how to interact with foreign businesses.”

Networking with other Moore School graduates has also helped Roth acclimate to his new career.

“There is an automatic bond when meeting someone and talking about being a Moore School grad,” Roth said. “It also signals that individual is capable as we all know the Moore School is the best business school in the Southeast!”

From baseball, he said he learned “hustle and failure. In my new role, I use the same hustle and dedication I poured into baseball to grow, learn and excel,” he said. “And just like in baseball, I am constantly celebrating failure and learning how to improve from it.”

Aside from the skills he learned in baseball, both professionally and at UofSC, and those gained from his Moore School coursework, Roth said he will always look back as a two-time College World Series champion with fond memories.

“I was very fortunate to be a part of incredible teams while at UofSC,” Roth said. “What made us great is not unlike what makes great businesses: people, products and process. We had incredible people on that team – guys that had the desire to be great and put in the work.

“That dedication showed in the product we put on the field all aided by the processes that Coach [and current UofSC Athletics Director Ray] Tanner and the staff put in place. There are several moments on the field that stand out, but the fondest memories are and will always be the time spent with teammates on the bus rides, pushing each other to be better in the gym and simply having fun.” 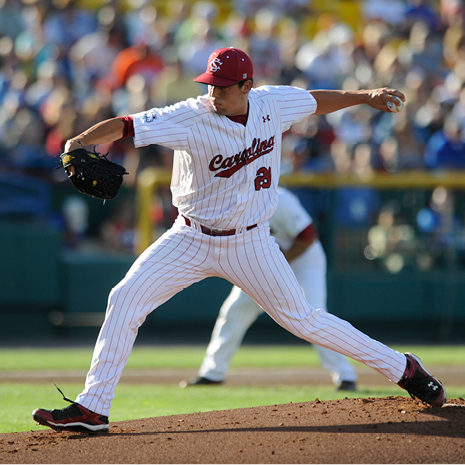 When Moore School alumnus Michael Roth won two College World Series in 2010-2011 with the Gamecocks, he was also pursuing degrees in international business and marketing. He's using his degrees to sell commercial real estate after retiring from professional baseball in 2018.