Eleven Moore School Master of International Business students are getting a firsthand look at how an organization considers the viability of expanding internationally while also trying to protect the environment.

As part of their advanced international strategy course, the students are working with Seabin, an Australian company that installs Seabins – trash bins in the ocean – to collect trash, oil and microplastics in marinas, ports and yacht clubs, areas that are heavily affected by surface level debris.

In their advanced international strategy course, the students not only learn about consulting methodologies, but they also get a deep dive into a particular industry, said Wolfgang Messner, a Moore School international business professor who teaches an undergraduate and graduate section of the course each year. The courses are offered in close collaboration with the South Carolina Small Business Development Centers and Thomson Reuters. The main goal for the students is to identify and structure an internationalization initiative within growing organizations.

The graduate course is available for students in the Master of International Business program, which is an interdisciplinary program that helps students develop an understanding of the political, sociocultural and economic institutional settings worldwide.

Seabin was initially created through a crowdfunding effort in 2015. The Seabin product has only been available since 2018 after several years of testing prototypes, so it is a growing company, said Mahi Paquette, Seabin’s chief operating officer.

For the Seabin project, students gain consulting skills while also learning about international environmental sustainability. Seabin wants to further expand into North America, South America and Central America. Currently, the company has 860 active Seabins in marinas in more than 50 countries, and they’ve captured 692,703 pounds – close to 350 tons – of trash, oil and microplastics.

Seabins are currently in operation in one marina in Hawaii as well as in nine other states and in five marinas in California but have not expanded to the rest of the United States.

“While their goal is to increase the number of Seabins around the world, their mission is to ultimately live in a world without Seabins,” said Anna Radulescu, an MIB candidate who plans to graduate in May 2020. Radulescu is an MIB double-degree program student and will earn a second master’s degree, a Master of Management, from the ESCP Europe business school in spring 2021.

Seabin is looking to expand into the Western part of the world “because they don’t have much of a presence there yet,” Radulescu said. “Their main presence is in Europe and Australia with a few in Asia.”

The interesting aspect of the Seabin Project, and other companies with similar ocean filters, is that they’re working toward a common goal despite trying to each make a profit, said Laura Keilhofer. Keilhofer is an MIB double-degree candidate who plans to graduate in May 2020 with her MIB and a second master’s degree, a Master of International Management, from Bocconi University in Milan, Italy.

While the students for each team have completed detailed analyses of the various locations that are optimal for Seabins, they are learning even more about the nature of consulting, Messner said.

“They learn everything from approaching the client, scoping the work, what the client needs to planning the project, executing it and putting together their final presentation,” he said. “They are able to become experts in a particular industry that may be helpful for them later on.”

A key aspect to consulting that Radulescu has learned is managing client expectations.

“With the client, they may want more than you might be able to give them,” she said. “It is important for us to understand that we’re working with idealists – they want the world to be a better place, and [with Seabin], they want to be in every country and in every marina. It’s up to us to look at the feasibility and determine the best approach.”

MIB candidate Sunnie Duong said that being clear about what the client wants from the consultant is especially important to establish in the beginning of the project.

“I’ve learned consulting is not only working for but also working with the client,” said Duong, who plans to graduate from the MIB one-year program in May 2020 with an additional graduate certificate in business analytics. “You want to make sure that you deliver what they need and what they want at the same time, and sometimes they’re not the same.”

The students are also learning about the major differences between creating a presentation for an academic course versus creating one as a consultant for a company, said Jake Wilson, who plans to graduate from the MIB one-year program in May 2020. Wilson has been working for two years for Colite International, a renewable energies company in Columbia, South Carolina.

“You’re giving the client a long-term deliverable and essentially sharing the logic that led to a conclusion,” Wilson said. “That’s been an interesting aspect of the Seabin Project – the thoroughness required to complete the project.”

The list of countries, states and territories where they recommend Seabin consider expanding is based on many intricate factors including whether a marina or area experiences high hurricane likelihood, below-freezing temperatures, frequent turbulent wave activity, among others. The groups also looked at which coastal areas had the highest levels of pollution and cross-referenced those with the eliminating factors.

In line with the optimal areas for Seabin installation, which costs $4,000 per device with most marinas installing between two to six devices depending on their size, Seabin also wants to educate the communities that use their product, Wilson said.

“As a business owner with inserting the Seabin, there’s no immediate return on investment in the traditional sense,” Wilson said. “Part of the ROI is the long-term environmental sustainability, which is why the education piece is so important.”

The marina owners or governmental entities have to service the Seabins, from gathering all of the trash and disposing of it properly to general maintenance, so customers have to buy in to ocean conservation and sustainability efforts, the students emphasized.

“Tackling this conservation issue, cleaning the oceans will affect us later on in life,” said William Fromm, an MIB double-degree candidate who plans to graduate in May 2020 with his MIB and a Master of International Management from Bocconi University in Milan, Italy, in 2021. “It’s fascinating to have an opportunity that can impact how a company approaches their integration into the United States and South and Central America.”

Fromm said the project also has shown the groups the challenge of curtailing ocean pollution for companies like Seabin – whose missions include genuinely wanting to reverse such a large-scale, worldwide problem. By incorporating state support in their analysis, the team will prepare recommendations where Seabin can seamlessly operate and advance the community’s responses to environmental challenges.

While the students are benefiting from the consulting project, Seabin is also excited about the collaboration with the Moore School, said Paquette, Seabin Foundation’s chief operating officer.

“The contributions from the two [Moore School] teams have been extremely valuable to Seabin’s vision of including more Seabins in the Americas,” said Paquette. “We couldn’t have gathered all of this valuable information in such a short time frame. We are very grateful for this collaboration.”

Seabin CEO and co-founder Pete Ceglinski said the two groups’ reports on their findings are impressive.

“The thoroughness and detail that went into the presentations was next level, and my only feedback was not questions but compliments,” he said. “These students have a very bright future ahead of them in their chosen paths coming up.”

One of the goals for the Seabin Project is to provide practical and tangible solutions to reduce the plastics in the oceans – one of the world’s greatest problems. Their journey started with a simple idea: If we can have rubbish bins on land then why not have them in the ocean? Over time, the scope of the project evolved into a comprehensive research, technology and educational initiative with global interest and reach. A non-profit, the Seabin Foundation works with stakeholders interested in the Seabin devices to raise awareness about how to have cleaner oceans and protect the environment long-term in addition to cleaning up the oceans. They engage with schools and communities to educate individuals on the importance of ocean conservation and how everyone plays a role in finding solutions to the ocean plastics crisis. 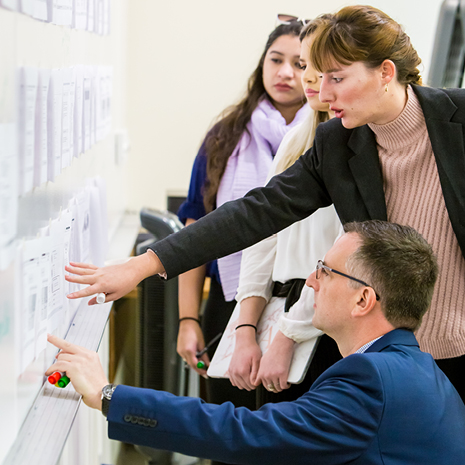 A Master of International Business course taught two groups of students how to provide consulting services for an international company while also learning about ocean conservation.

Learn more about the Master of International Business program