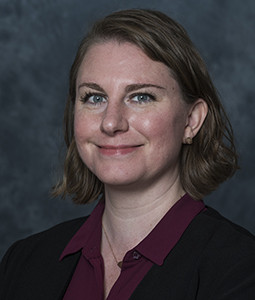 Marjorie Riddle Duffie joined the Moore School in April 2019; she is the communications and media relations manager. In her previous eight years with the University of South Carolina, she was a front desk manager and special programs assistant director for the Visitor Center and the PR and marketing director for Student Health Services. Duffie was also a staff writer for The State newspaper and a communications professional for nonprofits before coming to UofSC.

While she was Student Health Services’ PR and marketing director, Duffie was on the UofSC team that won the Silver Addy Award in 2016 for the Stop Sexual Assault campaign. She was also part of the group that won the NASPA Silver Excellence Award in 2017-18 for the Student Health, Wellness, Counseling and Related Area category for the Mental Health Matters campaign. Having completed UofSC’s on-campus trainings, Duffie is a SafeZone LGBTQ, Green Zone military and International Friendly ally.