The Carolina Colorguard is an integral visual component of the Carolina Band and exemplifies the band's spirit and intensity. The guard includes USC students of all backgrounds and majors who want to perform at the highest level. The Carolina Colorguard is the perfect combination of students from both rising and accomplished levels of guard performance. There is a renewed energy and focus within our guard, focused simultaneously on both tradition and innovation.

The Carolina Colorguard rehearses 5 - 6:30 p.m., Tuesday through Friday during the fall semester, with an additional hour sectional one night per week. Members are selected through a competitive audition process in the spring. Members participate in all rehearsals and performances and receive a scholarship for their participation in the Carolina Band.

Specific information regarding the 2023 Carolina Colorguard auditions is not yet available. A clinic session will be held in the spring to assist interested students prepare for the auditions, or just to improve guard skills. Auditions are performed on flag only. Separate rifle auditions will be held early in the season.

Students should bring their own pole/flag, if possible.

All clinics and auditions are held in the spring at the Copenhaver Band Hall, 326 Sumter Street.

Taylor is a senior Nursing major and is pursuing a double minor in leadership studies and Health Promotion, Education, and Behavior. In Taylor’s free time, she enjoys doing Xtreme Hip Hop and reading by the pool. She also works part-time as a Pharmacy Technician with Walgreens. Taylor has been doing Colorguard for eight years and has a dance background focusing in on Acro dance. She also cheered for her HS Varsity team for three years while cohesively doing marching band. Taylor knew she wanted to be part of the Carolina Band when she came for a USC HS cheerleading event and the Carolina Marching Band had her captivated the moment they stepped onto the field with Gridiron. She has been marching with the band for three years and is ecstatic to start her fourth season. She is grateful for this opportunity and can’t wait for this exciting new journey with the band.

Leeanna Hames is a junior at the University of South Carolina and a third-year member of the Carolina Colorguard. She came to USC from her hometown of Blacksburg, South Carolina, where she began her passion for colorguard eight years prior at Blacksburg High School. She is currently earning a degree in art education with a minor in dance. In the Carolina Colorguard's offseason, she spends her time performing with the Etude A Winterguard, based in Charlotte, North Carolina. Leeanna is thrilled to be on the leadership team and looks forward to another Carolina Band season! 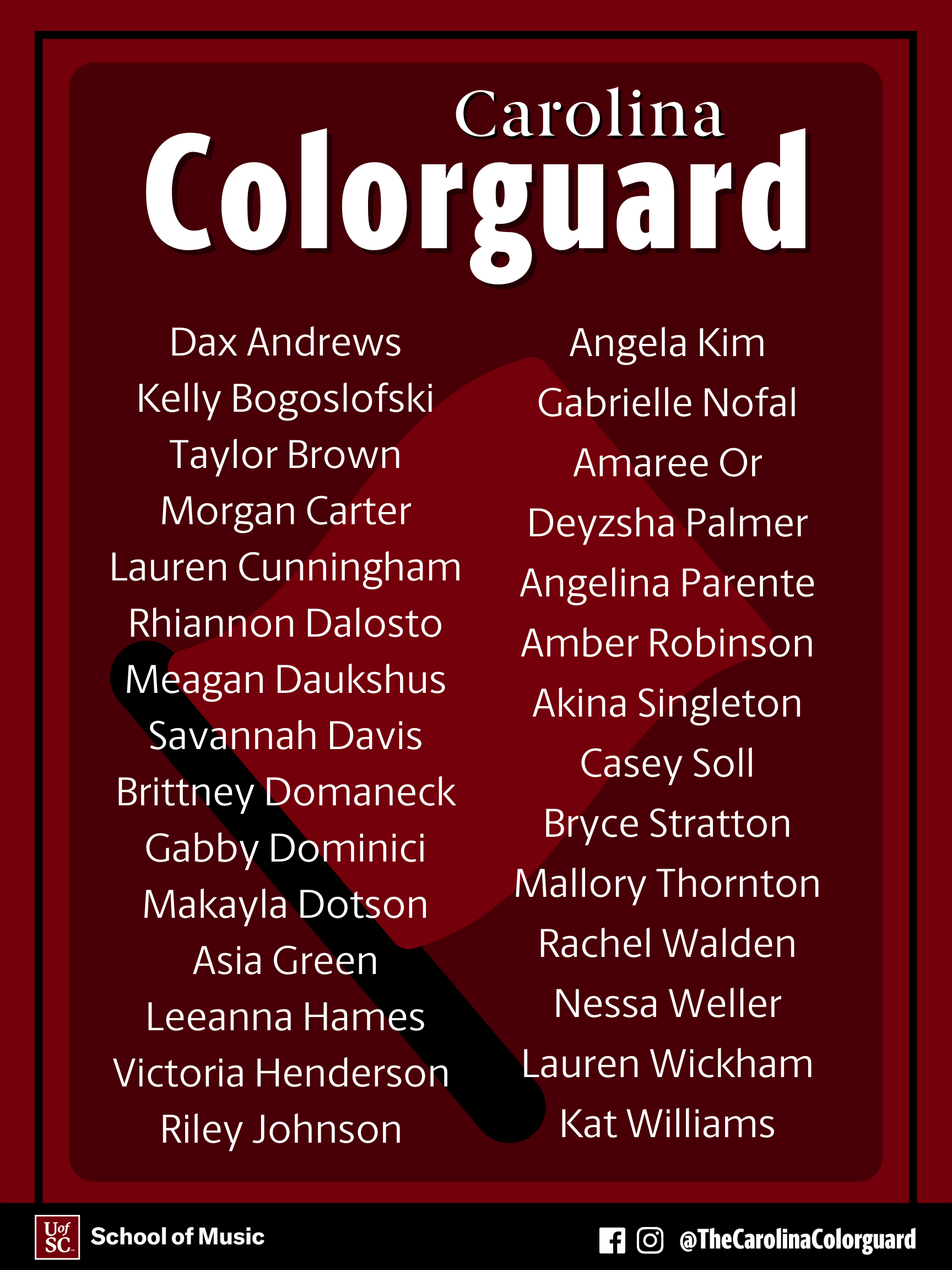 Billy Pacifico is an active educator and choreographer currently living in Suwanee, Georgia. He is proud to be co-program coordinator and choreographer for the Carolina Colorguard. He is well known as the director and choreographer for Collins Hill HS. Under his direction Collins Hill HS was a WGI Scholastic A Class Finalist, a WGI Scholastic Open Class Finalist, and SAPA State Champions in 2010 & 2011. He is currently the Artistic Director for Edge Independent in Atlanta, Georgia. Billy Has been with the Divenire Winterguard out of Birmingham, Alabama for three seasons now and continues to work with the program. Other programs Billy currently works with include Mill Creek HS (WGI SA and Open class Finalist),  Paramount A (WGI IA World Champion) and Paramount Open (WGI IO Finalist). Billy has also choreographed for Stoneman Douglas HS Open (WGI SO Silver Medalist), Stoneman Douglas World (WGI SW Finalist & BOA Atlanta Super Regional Finalist), Gainesville Independent Open (WGI Finalist), Fahrenheit World, Alliance of Miami World, Greater Johnstown (NY) Open, Western HS, Coral Glades HS and many more.

As a performer Billy is an alumnus of The Cavalier Drum and Bugle corps in 2002. For his indoor experience Billy was accepted as a member of The Alliance of Miami Winter Guard. His membership at Alliance began during high school at the age of 15 and continued through his age out in 2002.

In her spare time Katie adds to her teaching experience through consultation work with various programs throughout Georgia as well as designing winterguard soundtracks.

Madeline Donaway is the newest member of the University of South Carolina Colorguard staff. She was a member of the Carolina Colorguard from 2013 to 2017 and has been a guard instructor for high schools in South Carolina since her graduation from USC in 2018. Madeline has competed in Bands of America and WGI and coached students in the CWEA circuit. She is a 5th-grade teacher at a school for students with Dyslexia and Learning Disabilities and is pursuing a master's degree in Education Administration. Madeline is so excited to be a part of the Carolina Band again and cannot wait for the football season to begin!

Questions about the Carolina Colorguard?