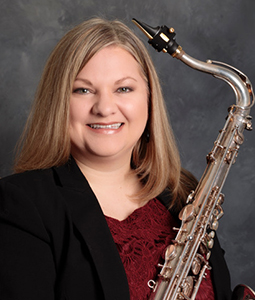 LAUREN MECCIA is Instructor of Jazz Studies at the University of South Carolina and was formerly the director of jazz ensembles at UofSC and UofSC Aiken. She founded the CSRA (Central Savannah River Area) New Horizons Band for senior adults in Aiken, SC and currently directs the Crescent Moon Jazz Band as part of the Congaree New Horizons Band program at UofSC.

Lauren earned a Bachelor of Music in Education with a Certificate in Saxophone Performance and a Master of Music in saxophone performance from the University of South Carolina. She has performed at jazz and music festivals throughout the Southeast and across the US.  Lauren is a member of the South Carolina Jazz Masterworks Ensemble as well as the Charleston Jazz Orchestra. Lauren was twice a featured performer at the NAMM (National Association of Music Merchants) Show in Anaheim, CA. She has been a featured soloist with symphony orchestras and concert bands throughout the US and has appeared in concert with Camille Thurman, Veronica Swift, Jon Faddis, Kenny Barron, Chris Potter, Jeff Coffin, Wycliffe Gordon, Tommy Igoe, the Glenn Miller Orchestra, the Temptations, Maurice Williams and the Zodiacs, and Jesse Colin Young.

Lauren’s debut vocal album, Inside Your Eyes, was released in 2015 and has received positive reviews in jazz publications throughout the United States, Russia and Japan.