No matter what happens on the field, at least one Gamecock will be in the College Football Playoff this year.

Football season is here, and the goal for the Gamecocks is the College Football Playoff. If they get there, they’ll find a University of South Carolina alumna waiting, thanks to her performance off the field. 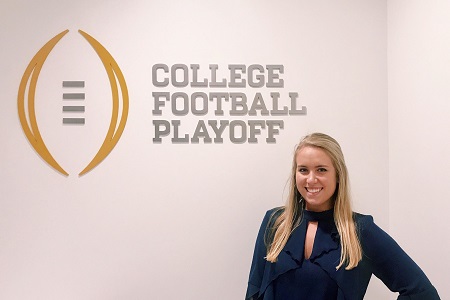 Tiffany Ancharski earned her bachelor’s degree in sport and entertainment management in May. Her accomplishments in and out of the classroom, she earned a place as one of just six interns hired by the College Football Playoff out of hundreds of applicants from all over the country.

As it happened, all six interns hired by the Playoff this year were women. Ancharski is well aware of the barriers that once would have kept her and her new colleagues from such jobs, but also had a chance to learn from some of the women who helped break those walls down and now serve on the faculty at UofSC.

"It's been inspirational for sure,” Ancharski says of having powerful, accomplished woman among her professors. “The industry is definitely going in the direction of equality, and this go-around the women just happened to be the better candidates."

Ancharski chose her major after attending an information session while touring campus as a high school junior. From the moment her freshman year began, she worked to stand out from the crowd and take advantage of the opportunities her department and university offered.

"You just have to put your mind to it and go all in."

As a freshman, she applied to work at The Masters in Augusta over spring break. First-year students are rarely selected, but Ancharski decided to try anyway. She sent her application, then followed up regularly, and finally received good news.

“He told me ‘I wasn’t going to hire you, but you were so persistent,’ ” Ancharski says of her conversation with the hiring manager from Augusta National. That job proved to be a springboard for her. While at UofSC, she worked at The Masters and the U.S. Open three times each and once at the PGA Championship. Experience like that on a resume grabs attention when a new graduate is looking for jobs.

Ancharski took to heart advice from Steve Taylor, internship director for the Department of Sport and Entertainment Management, to “Put yourself out there. Volunteer as much as you can.” She was not a golf fan before college, but liked the tournament aspect and decided to try it. Now, having worked some of the world’s biggest golf tournaments, she takes on college football’s biggest event.

"Any event that comes your way and sparks a feeling in you, do it,” she says about her philosophy. "With the College Football Playoff, it was like 'This one is awesome. I really want this.' You just have to put your mind to it and go all in."

"It's a huge event and there's something you have to do every week leading up to it,” she says. "I liked being in charge. I had to learn about not trying to do everything, and trusting them to do their jobs."

Ancharski began work in August at College Football Playoff headquarters in Irving, Texas. Her position focuses on hospitality and fan services, and she says she’s eager for things to kick into high gear as the season moves along.

Ancharski’s role will include helping plan the hospitality and fan services arrangement for the national championship final Jan. 7 in Santa Clara, California. Nothing would make her happier than to help host her alma mater and arrange for Levi’s Stadium to be decked out in garnet and black.